How do I preserve named text anchors in EPUB export from InDesign?

Overview: I'm trying to export an index for an ebook using Ole Kvern's scripting tools, linked to the paragraph level instead of page numbers. The index was created outside of Indesign, in Macrex indexing software, but was set up using the names of text anchors in the InDesign book. Unfortunately using InDesign's native indexing isn't an option at this point (incredibly long book was already indexed with Macrex, would cost thousands to redo).

I think the InDesign documents are set up correctly. But when I export one of the documents (or the entire book) to EPUB, the hyperlinks that the index needs to point to (should look like 34) are exported instead in the form of .

Is there any way to preserve the text anchor names that show up in InDesign so that they are retained in the EPUB export?

Here's a screenshot of the InDesign document (I opened the new cross-references panel to show that the text anchors appear to be named correctly by the script, which inserted Notes and Hyperlinks at the beginning of each paragraph): 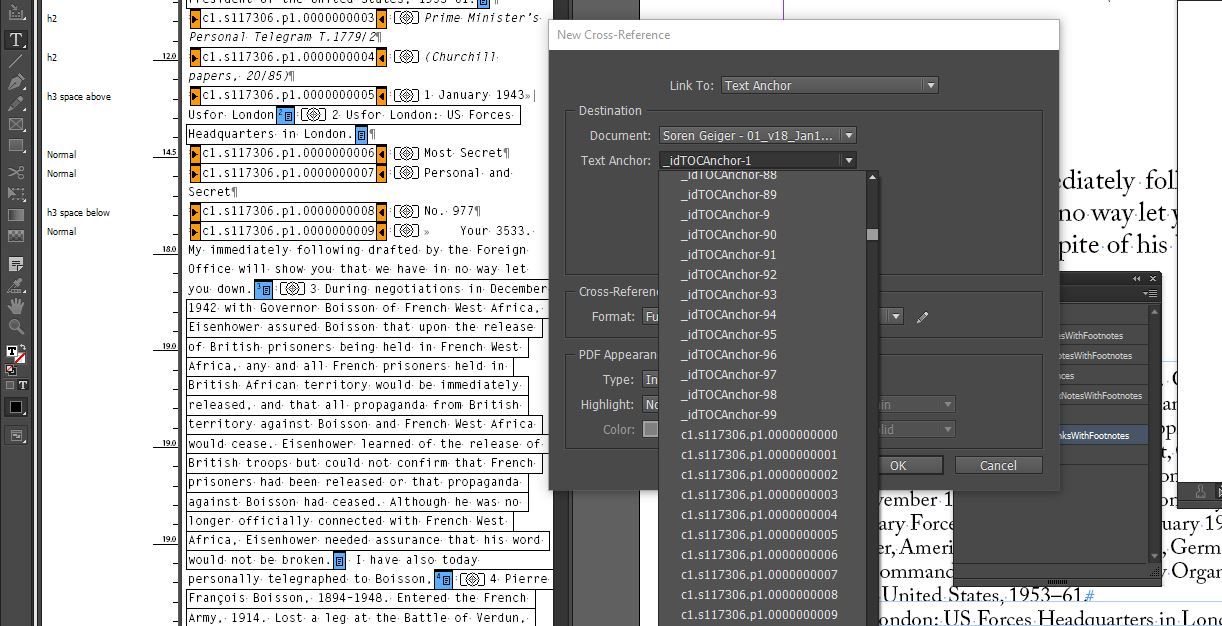 And of the corresponding lines of the EPUB export:

I'd really appreciate any ideas as to how to get the tags in the EPUB to match the names of the hyperlinks in InDesign--thanks!

Browse other questions tagged indesign hyperlinking or ask your own question.

7
How easy is it to add a table of contents to an epub book?
7
EPUB & Kindle File Glossary and Dictionary Selection
3
How to avoid sporadic page breaks in epub when using page markers?
1
How to remove extraneous page numbers from ePub TOC